SUNDAY: ATHENS On arrival you will be met by our assistant and transferred to your hotel by our taxi driver. Rest of the day at leisure.

MONDAY: ATHENS/MYKONOS Morning transfer from your hotel to the port by our taxi driver to embark on your selected cruise ship. 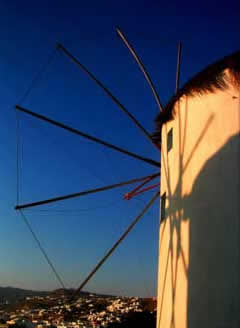 TUESDAY: KUSADASI/PATMOS First port of call today is the Turkish port of Kusadasi, with the optional tour to Ephesus. Then on to the island of Patmos, famous for the Monastery and the Grotto of St. John.

WEDNESDAY: RHODES Early morning call at the magnificent island of Rhodes, with the famous Acropolis of Lindos.

THURSDAY: HERAKLION/SANTORINI First port of call today will be the island of Crete with the Palace of Knossos and the Museum. Then on to the island of Santorini, believed to be the lost continent of Atlantis.

FRIDAY: ATHENS On disembarkation after breakfast, you will be met by our assistant and transferred from the port to the terminal of the tour company for the Athens sightseeing tour including a visit to the spectacular Acropolis. Afternoon at leisure.

SATURDAY: ATHENS/OLYMPIA Early in the morning, departure for a 4 day classical tour. Today visit ancient Mycenae and Epidaurus theater, famous for its acoustics. After a short stop at Nafplion depart for Olympia through the central Peloponnesus. Overnight in Olympia.

SUNDAY: OLYMPIA/DELPHI In the morning visit the sanctuary of Olympian Zeus, the ancient stadium and the archaeological museum. Drive on through the plains of Ilia and Achaia and over the magnificent cable stayed bridge of Rio-Antirio. Arrive in Delphi, overnight.

MONDAY: DELPHI/KALAMBAKA In the morning visit the archaeological site and the museum. Depart for Kalambaka, a small town situated at the foot of the astonishing rock formations of Meteora. Overnight in Kalambaka.

TUESDAY: KALAMBAKA/ATHENS Visit Meteora. Amidst striking scenery, perched on huge rocks which seem to be suspended in mid-air, stand ageless monasteries where you can see exquisite specimens of Byzantine art. Return to Athens for overnight stay.

WEDNESDAY: ATHENS/AIRPORT After breakfast you will be met by our assistant at your hotel and transferred to the airport by our taxi driver for your departure flight.