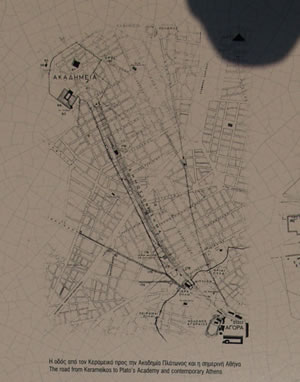 The site of Plato's school of philosophy has been discovered. Originally a sacred wood 2 Greek stadia in diameter, (a stadia was 600 Greek feet and the word "stadium" is derived from it) it stood about 6 stadia from the Dipylon Gates and today may be seen by leaving Keramikos ancient cemetery on Salaminos Street or the parallel Plataion Street.

2/3's of the way there you will see the Church of Aghios Georgos at the corner of Palamidou Street which stands on the ancient sacred way or "Ira Odos".

The Church of St. Triton on Kolokynthou St., off the North side of the main Corinth highway marks the southern corner of the Academy of Plato. It was confirmed in 1966 by the discovery of a boundary stone dated to 500 BC.

Nearby is the hill of Kolonas Hippios (56m), the refuge of Oedipus.

The Academy was originally founded by Hekademos and known as the Hekademeia. It contained 12 sacred olive groves purportedly shoots from the sacred tree of the Acropolis. Hipparchos built a wall around the academy in the 6th C BC and remains have been found. The river Kephissos was also diverted to change the topography from dry to well watered and lush.

Plato taught here from 388 BC. and it also served as a gymnasium. Sulla cut down the academy trees to build siege engines but the devastation was repaired by subsequent Romans. Funeral games were also held here and its alter of Promemeikos was the goal of torch races from Athens.

Excavations were begun in 1929-40 and there are now 2 main areas some 230 m apart. Many schoolboy slates were discovered bearing the names of Sophocles and Demosthenes during clearing of the debris. Minor site accessible by major road.