Within Sterea Ellada: The Akarnanian Mountains 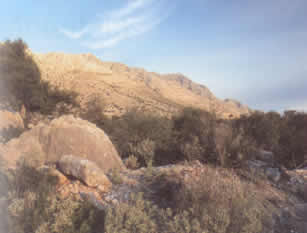 These are little-visited limestone mountains to the south of the Amvrakikos Gulf (above, which reach 1589 meters (5212 feet) at their highest point. The central area is of interest botanically, as it is wooded, while the outer seaward areas are quite rocky and denuded by long-term grazing and burning.

The terrain is maquis, with junipers, kermes oak, strawberry-tree, smoke bush, maples, and with oak forest higher up, and still higher, Greek fir, followed by open pastures above the tree line, which are covered with snow up until early spring.

Though unprotected, the interior part of these mountains is a good bird site with one of the Greek mainland's largest griffon vulture colonies (of which there were only perhaps 300 pairs nationwide, at least a few years ago, with half of these on Crete). The colony here has declined from 30-40 pairs to only around a dozen (again, according to figures of a few years ago).

In the higher areas and the forests here there are also Bonelli's and short-toed eagles, peregrines, eagle owls, and honey buzzards. The north-south road from Paleros to Astakos, which is close to the coast, skirts the area, but for the center one must settle for poorer roads, one going south from Monastiraki, the other from Petra.