Gateway to the Sporades Island group from Kymi, this, the second largest Greek island (after Crete), lies along the east coast of the Greek mainland from Athens due north, was once attached to it, and is now separated from it by straits of varying distance, the smallest of which is only a few meters, and crossed by a new suspension bridge. Reachable also by train (2hrs).

Incidentally the reverse direction of the flow of the waters in the straights by Halkida, continues to baffle savants and scientists today! Thousands of years after Socrates threw himself into the waters in frustration. Seems the water switches direction every few hours - has for epochs - how Greek!

The northern part of the island is known for its outstanding and unspoiled nature. Some 31 km roughly east of the main city of Halkidha (which is mostly on the island side of the swing bridge) is the island's highest mountain, Dirfis, (see photo below) whose highest point is 1743 meters (5717 feet), a conical peak with snow on it throughout the winter.

The area to the south of it, as far as the Mavrovouni Massif (inland from Kymi) and north towards Pilio, encompasses huge areas of unspoiled forest, primarily of Greek fir, but with some chestnut and pine as well, grassy openings, limestone screes, and cliffs.. 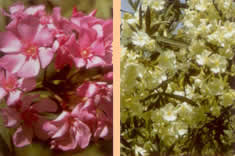 The area is rich in flora, with both special and endemic plants are found here. Endemic plants are also found amid the rocks on the dry, barren mountain to the southwest, called (appropriately), Xerovouni (which means 'dry mountain').

The area in general is significant for its birds of prey, with perhaps three kinds of eagles, including this golden one right, griffon vultures, two kinds of falcons, lesser kestrels, eagle owls, and other more common birds. In the wooded areas beech martens are found. There are many dirt roads throughout this area. A sturdy vehicle is recommended for these type of back roads, not neccessarily 4 wheel drive but in good condition!!!! 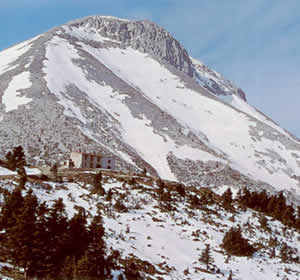 Another mountain range to the north of Halkidha, Kandili, is roadless (at least north of Nerotrivia), and yet to be fully explored, with extensive conifer forest on its slopes of pine (Pinus brutia) and Greek fir, with some black pine higher up. 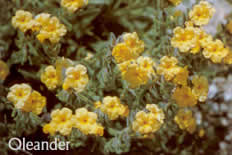 There are small gorges in the area, as well as open limestone grassland, and cliffs, with birds of prey including Bonelli's eagles and golden eagles, Eleonora's falcons, honey buzzards, and lesser kestrels.

Endemic plants are found in the higher areas. To the south of these mountains near the rather built-up town of Nea Artaki, is a coastal wetland with saltmarshes and reed beds. 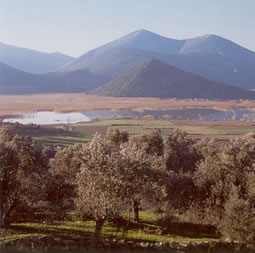 A much larger coastal wetland of some 1482 acres (600 hectares) is found on the north coast, northeast of Isteia, comprised of a lagoon fed by streams and freshwater springs, reed beds, woods, sandy beech, and scrub. White storks and little terns breed here, and there are quite a few kinds of migratory birds seen here, including many mute swans.

The southern part of the island once boasted a truly fabulous lake,
Lake Distos (left) by name, to the south of the eponymous village. 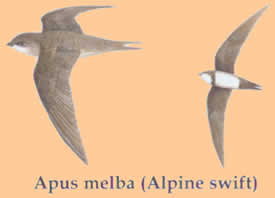 been drained and reclaimed as rich farmland, and hunting and agricultural pollutants have also taken their toll.

Though it can fill up in places with open water, it has mostly been reduced to reeds and fen vegetation. Still, some species have still been found to breed there in recent years, incuding little bitterns, night herons, little egrets, and other wetland birds, and waders have been recorded in recent years. 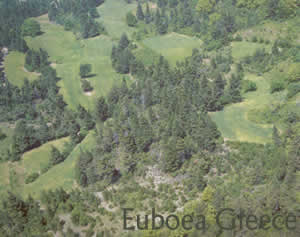 The surrounding hills are chiefly unspoiled, and host quite a few flowers in spring, including some orchids, and crown anemones, among others.

Birds that breed in these hills include a few birds of prey.

To the south there is an area of serpentine rock with unusual flora, though the recent construction of the new north south road has destroyed parts of it.

An old flooded quarry near the road has become habitat for terrapins, dragonflies and marsh frogs.

Mt. Okhi (Ochi), in the southern tip of the island, is Evia's second highest mountain, at 1400 meters (4592 feet) and, like the higher Dirfys, has snow on it into the spring.

Quite wild and relatively unknown, this mountain hosts some endemic flowers and a rare kind of marjoram, and is a good area for birds of prey, including at least two kinds of eagles, Eleonora's falcon, peregrines, and long-legged buzzards.

The range of species has been reduced by clearing of much of the original forest.

To the west of the nearby small town of Karystos (the main town on the southern tip of the island), are marshy areas, saltpans and a river estuary which sees some passage of migratory birds in spring, and which is habitat for amphibians, reptiles and dragonflies.

Ochi is best visited between April and early July; there are dirt roads to it from Karytsos, and on the east side from Metokhi. Read more about Euboea here. Great beaches too!