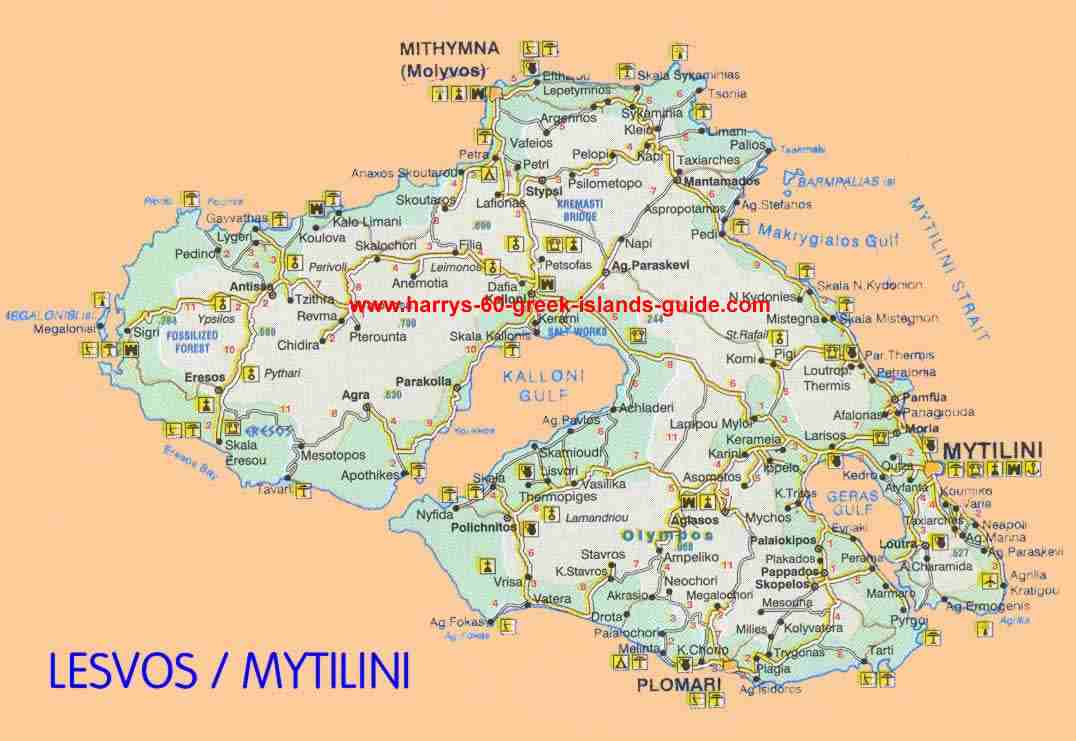 The third largest island of Greece (after Crete and Evia/Euboea), Lesvos deserves plenty of time to explore its many virtues.

Among them are the its large gulfs, of which the larger, Kalloni, has one of Greece's prime bird watching sites on its shores, and sardines are fished from its waters.

There are an estimated 11 million olive trees on the island, which produce one quarter of Greece's olive oil.

Its traditional village on the south coast, Plomari, is known for its ouzo distilleries and old Ottoman architecture, and the mountain village of Ayiassos with its old cobbled streets and red tiled roofs, is home to a famous church visited by great numbers of pilgrims on the 15th of August (The Assumption of the Virgin).

There are long sandy beaches at Vatera in the southeast and at Eressos in the northwest, with a petrified forest to the north of the latter. On the northeast tip of the island is the beautiful village of Molyvos, topped with a fortress; monasteries, fishing villages, and many hot mineral baths are found all over the island.

The main harbor city (Mytilini), with a population of about 30,000, has an impressive crescent shaped waterfront with neoclassical buildings and a prominent silver domed church, with nice pedestrian market streets back in, with vegetable and fish markets, metal and wood working shops and antiques. To the north along the water, there's a Roman-Genoese fortress, a mosque and old Turkish bathhouse. Restored mansions, cathedrals, a Hellenistic Theater, Archaeological Museum, Museum of Traditional Arts and Crafts, and buildings that house a branch of the University of the Aegean, are all found in this city, which has a summer festival from mid July to late August.
There's plenty of accommodation in Lesvos, as well as good eating and drinking places. Local cheese and freshly caught sardines are exceptional!